When Should I Neuter My Akita? 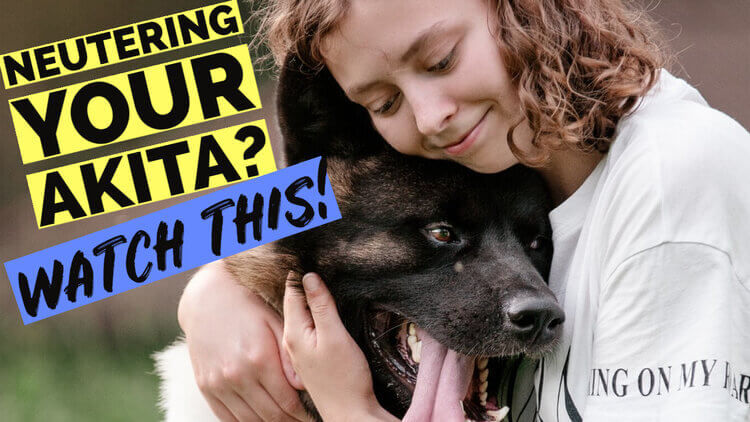 “When should I neuter my Akita?” Neutering your Akita (or any dog) is a very sensitive and surprisingly controversial topic. There is so much information out there, most of it contradictory, so choosing the right time to neuter your Akita (or if you should even neuter them at all) can be quite confusing.

How much does it cost to neuter an Akita?
Will my Akita be more mellow after I neuter them?
What is the recovery time after neutering an Akita?

In this article we aim to answer all of your neutering questions. Please note, we will NOT be discussing spaying your female Akitas in this article. Let’s get started.

A Brief History of Neutering Dogs

Back in the 1970s, companion pet populations were out of control. Unfortunately this lead to many shelters having to euthanize thousands of animals each year. In an attempt to slow down population growth, and thus reduce the number of euthanizations, veterinarians began to push the idea of neutering and spaying pets. In the case of male dogs, this means removal of the testicles.

Neutering your male dog had been so common place, legendary host of the Price is Right would end every episode with “and remember to spay and neuter your pets!”

But within the last decade or so, people have begun to question whether or not they should actually neuter their pets. If you are the proud new owner of an Akita, you’ve probably been told that Akitas are aggressive, and dangerous, and that neutering your male Akita will make them more mellow.

But is that true? Should you even neuter your Akita, and if you do, when?

Why You Should Neuter Your Akita

There is also data that shows neutering your dog may extend their life span. Of course we want as much time with our pets as possible. Akita’s only live 10-12 years on average, so extending their lifespan even a small amount could potentially be worth it.

The last thing to consider in neutering your Akita is that many daycare programs, training programs, and dog boarding programs will not allow adult Akitas in their facility unless they have been neutered. For us, we find a lot of benefit in bringing Haga to a local day school with a professional trainer where he can interact with other dogs. It’s great for his socialization, training, and exercise. Just say the word “school” around him and he goes nuts (no pun intended). The facility we bring Haga to requires that male dogs be neutered by 12 months old.

When to Neuter Your Akita

If you’ve decided that neutering your Akita is the right choice, the next question becomes “when.” If you’ve adopted your Akita from a shelter, there is a good chance they’ll already be neutered. Our previous pup, Loki, an Akita mix that we adopted, was already neutered at 4 months old. Although research studies in animal behaviour can be difficult, a recent study in 2018 suggests that most of the behavioral changes in neutered dogs are actually negative, not positive. Things such as fear based aggression can increase in neutered dogs.

It may seem counter intuitive…remove the organs that produce testosterone, and a dog should “mellow out.” However researchers believe the reduced confidence due to lack of testosterone can actually make dogs more reactive. If you’ve ever heard the saying “The lion doesn’t worry about the opinions of sheep,” then this concept will make sense to you. An Akita with natural testosterone is confident in who he is as a dog, and doesn’t need to “prove himself” by being aggressive or domineering.

There have also been studies showing that neutering your dog can also lead to hip dysplasia, but it’s important to keep in mind that these studies were done only in Golden Retrievers.

All of these “negative’ side effects had one thing in common: They all were more prevalent when dogs were neutered at a very young age (less than 12 months). The Akita Club of America recommends waiting until at least 12 months to neuter your Akita, and many breeders will require you to wait until at least 18 months.

How Much Does it Cost to Neuter an Akita?

The next thing you’ll want to know is how much it costs to neuter your Akita, and what to expect when the procedure is done. Obviously costs will vary from one animal hospital to the next, but we paid $400 to neuter our Akita, Haga.

In preparation for the surgery, he was not allowed to eat for 12 hours prior to, since they put the dog under anesthesia. Upon arriving at the animal hospital, most veterinarians will want to do some blood work to make sure your Akita is in good health and it’s safe to do surgery. The vet tech’s at our local Banfield hospital where we bring Haga had a difficult time getting an IV in him due to his thick Akita fur, so the brought out the clippers, which just happen to be Haga’s arch nemesis!

Haga refused to participate in getting a small patch of fur shaved, so they had to sedate him to get an IV in him. Neutering typically only takes about 30 minutes once the procedure starts, with Haga’s taking a bit longer because he was also having a gastropexy and a potentially cancerous growth removed. All-in-all his procedure took about 2 hours, and the hospital held him for another 4 afterwards for monitoring.

Upon coming home, your Akita will likely be exhausted and somewhat disoriented from the anesthesia and pain medication. This is normal. You’ll want to watch out for coughing/sneezing, facial swelling, or vomiting, as these can all be signs of a reaction to the medication. Our vet instructed us to not let Haga run or jump for 14 days, and to also wear a cone (sometimes also called an “E Collar” because it’s shaped like an “E” when it’s unclasped) for 14 days as well.

Our Akita, Haga, refused to lay down once he was home, and was so exhausted he was falling asleep standing up. Worrying about his safety, I contacted a good friend who is a veterinarian (our animal hospital was closed at that point), and she recommended getting a prescription for anxiety.

Haga stood for the better part of 24 hours, until we could get the prescription the next day. Almost immediately after taking the anxiety medication, he finally laid down to get some rest, and he slept for about 6 hours.

We had posted about our experience on Instagram, and many of our Akita owning friends messaged us saying their Akita did the same thing after getting neutered or spayed, so we strongly encourage you speak to your vet about going home with some anxiety medication after your Akita is neutered. You don’t have to give it to them if they don’t need it, but it would have saved us a lot of stress and sleep had we known ahead of time.

We also swapped out our Akita’s cone for an inflatable doughnut. Both of which ended up being unnecessary as our little guy never once tried to lick his incisions. One last thing to note, although it wasn’t necessary, we’ve also heard great things about these.

Recovery Time After Your Akita is Neutered

As mentioned, our vet gave us strict orders to follow for the next 14 days, however by day 3, our Akita, Haga, was back to his normal self, and it actually became a challenge to keep him from zooming around the house and jumping up on the bed at night. We did our best…but in the end, he’s still basically just a puppy at 15 months old.

We kept a close eye on the incisions and the stiches, but by day 7, we returned to mostly normal activities, playing a bit in the house and taking him for longer walks outside. After his 14 day check-up, he received the all clear from the doc, and his puppy reign of terror can now continue.

We hope that this article has been helpful in determining when and if you should neuter your Akita. Remember, always do as much reading and investigating as possible before making such a big decision, and always talk to your vet. Neutering can be a highly personal choice for any Akita owner, and you want to make sure you’re making the right decision for you and your Akita.

If you want to get a more first hand look at what it was like getting our Akita neutered, check out our vlog about it: