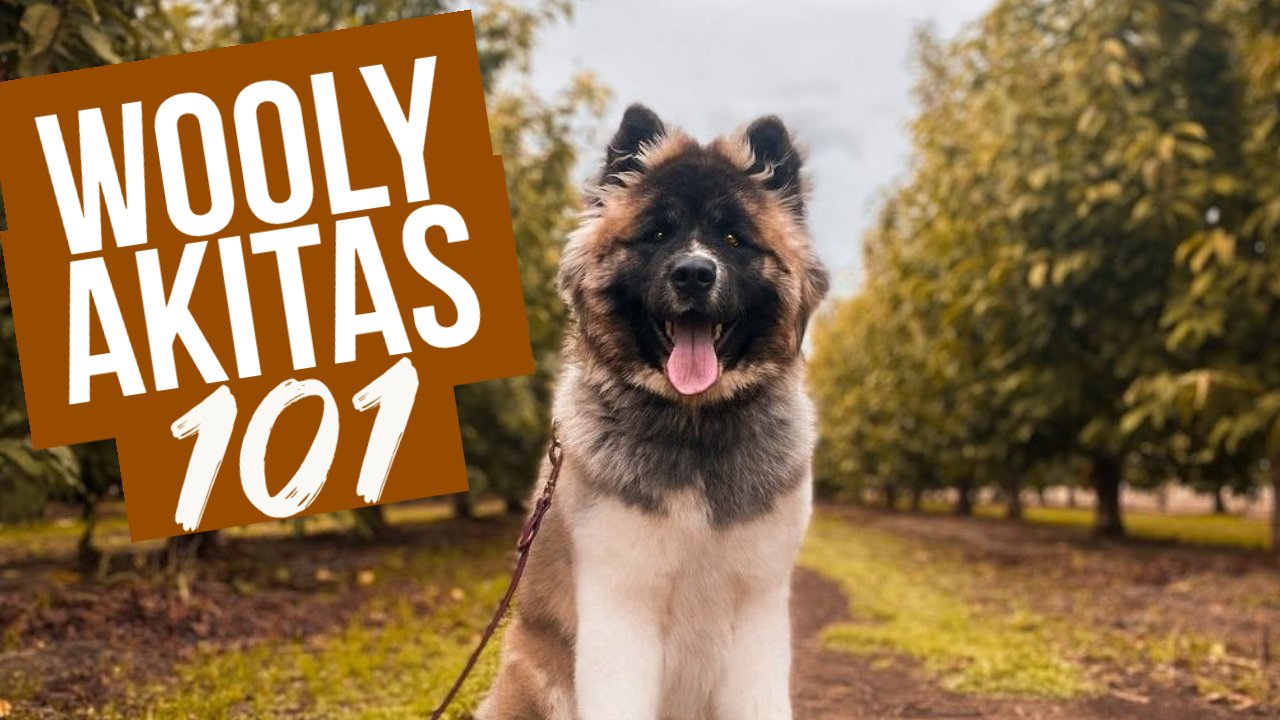 What is a Long Coat Akita?

When people think of Akitas, they typically think of either the American Akita or the Japanese Akita Inu. While these two dogs share some of the same heritage, they are recognized as separate breeds by the American Kennel Club. American Akitas tend to be bigger and bulkier, while Japanese Akitas are often described as more “fox like” but there is a third type of Akita that can be found as part of the American or Japanese line, and that is the long coat Akita, also known as Long Haired Akitas, or Woolies. (To see more of the Long Haired Akita in the Header Image click here)

In short, a Long Coat Akita is an American Akita or Japanese Akita Inu with an extra long outer fur coat, due to a recessive gene acquired into the Akita line when Akitas were mixed with the Karafuto-Ken dog also known as the Sakhalin Husky. These Akitas tend to be slightly shorter and stockier than a traditional coat Akita, again due to the additional gene in their doggie DNA.

History of the Long Coat Akita

In Japan, Akitas are known as “Akita Inu.” Akita is a region of Japan, and Inu is the Japanese word for “dog.” So simply put an Akita Inu was originally used to describe just about any dog in the Akita Prefecture region of Northern Japan. Dogs in this region were often used for hunting, herding, and protecting the household. This was all long before “dog showing” was a thing, so Akita owners weren’t as particular about how their dogs were bred, and instead would breed litters based on their individual needs.

As a result Akitas were often crossbred with other breeds. In the case of a long coat Akita, the gene that gives them their long and fluffy hair is thought to come from another Japanese breed known as the Karafuto-Ken, also known as the Sakhalin Husky. The Karafuto-Ken was commonly used as a sled dog, which made it a great choice for anyone living in the cold and wintry Akita prefecture.

Karafuto-Ken dogs became famous when in the late 50s a team of Japanese explorers went on an expedition to Antarctica with these brave dogs. When the explorers had to do an emergency evacuation due to weather, they left behind 15 of these sled dogs thinking that they would be able to retrieve them a few days later. Sadly they were unable to, and no one returned until over a year later, and found remarkably two of the Sakhalin Huskies had survived, named Taro and Jiro, who instantly became national heroes.

Although Akita breeders worked incredibly hard in the post-WWII era to return the Akita breed back to its pure bloodline, the recessive gene that produces the long and fluffy coat of a Woolie still resides in some Akitas today, in both American Akitas and in the Japanese Akita Inu. Sadly today, the Sakhalin Husky is nearly extinct, as there were only a known 7 dogs left in the world as of 2015. 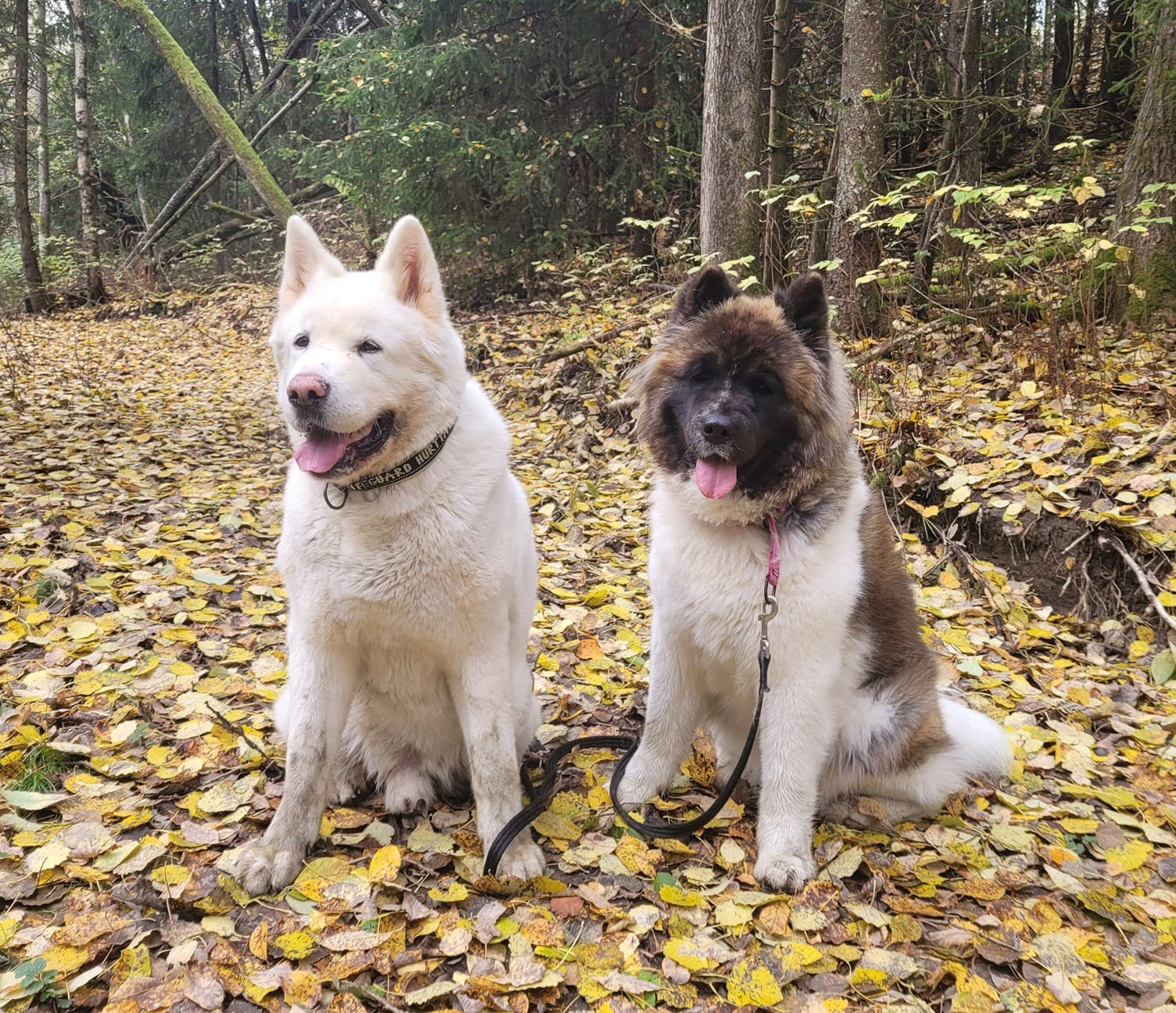 There are some differences between the Long Coat Akita and a Standard Akita. The first difference is obvious: The Long coat Akita has a longer coat with thicker fur. Woolies are also known to be slightly stockier with bigger bones. In regards to temperament, some people claim that Long Coat Akitas are also more mild and loving compared to the standard Akita, which are known to be more aloof and independent.

Because the Karafuto Ken was a shorter, and big boned dog, that is why the Long Coat Akita tends to have some of those qualities as well.

Both American Akitas and Japanese Akita Inu dogs are double coated canines. This means they have an undercoat that helps to insulate them from both hot and cold weather, as well as a longer outercoat to help keep them clean and add an extra layer of protection. With Long Coat Akitas, it’s the outer coat that has the longer and thicker fur.

Because Akitas are already prone to matted fur, and other issues like hot spots, you’ll have to take extra care of your Long Coat Akita. This means regular brushing, semi-frequent bathing, and the occasional trip to the groomer doesn’t hurt either. Although Long Coat Akitas may be a little bit of extra work, the unbelievable cuteness of these Wooly beasts make it all the more worth it.

Where to Get a Long Coat Akita

Because the gene that creates Long Coat Akitas is thought to be derived from a breed outside of the Akita bloodline, the American Kennel Club views the long haired Akita to be outside of the breed standard. What this means is that you the AKC considers the long hair of the Wooly Akita to be a “fault”, so reputable breeders will typically place Long Coat Akitas in a pet home. That also means most breeders do not breed specifically for long coats.

Good breeders are often doing genetic testing for the dogs they plan to breed, and they will know whether or not their Akitas carry the gene that produces Woolies. With that said, you must remember that the gene that creates the long-haired Akita is a recessive gene. That means even if both parents carry the gene, the litter may not produce a Long Coat Akita.

With that in mind, most people actually opt not to get a Long Coat, so if you find a breeder that knows their litters typically produce at least one Long Coat, you can usually get high up on their list to take home these extra special Wooly babies! As always be sure to check our Get an Akita Page to find a list of reputable Akita breeders and Akita Rescues

Do you have a long coat American Akita or Long Coat Japanese Akita? If you do, feel free to post a picture to the comments of your long-haired Akita! We love seeing these beautiful Wooly pups!

Previous Post
Are Akitas Good Family Dogs?
Next Post
What to Do if Your Akita Eats Chicken Bones/Wings