How Big Do Akitas Get? 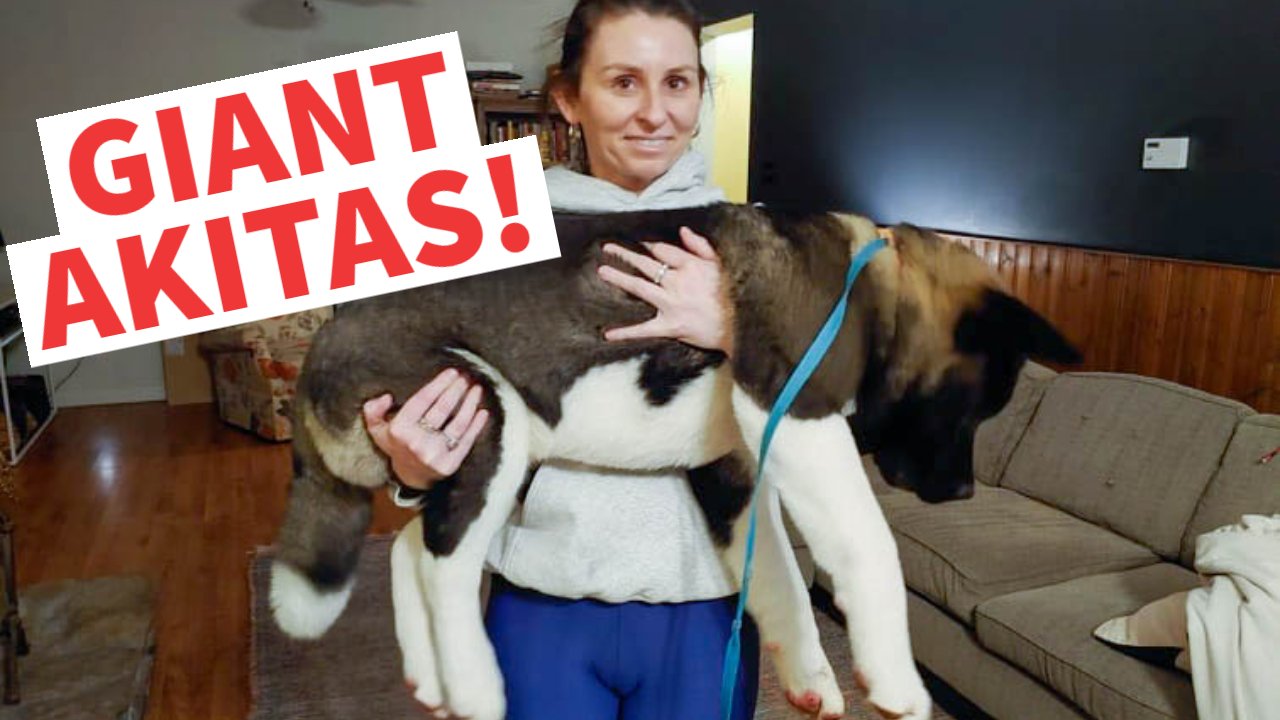 The dog world is a funny place. Some people love small dogs, some people love big dogs. If you’re in the latter camp, there is almost no limit to how big you want your dog to be. In the Akita community there is a lot of talk about dog size. Breeders brag about the weight of their Akita or the thickness of their bones. Potential Akita puppy owners are always inspecting litters looking for the biggest pup.

The truth likely lay somewhere in the middle. The dog showing world is an incredibly competitive place, and with that competition comes exaggeration, cheating and jealousy. In Martha Sherrill’s 2008 book “Dog Man” she details the life of Akita breeder from Japan, who in the 1950s had his prized show dog poisoned by another competitor.

So how big are Akitas really, and why does it matter? Let’s get into it.

First it’s important to distinguish the fact that the Akita breed is actually split into two somewhat different breeds. Here in the United States the American Kennel Club does not distinguish between the two, and when people simply say “Akita” they are typically referring to what we call an “American Akita” and we refer to the other Akitas as “Japanese Akitas.”

While the two types of Akitas share some similarities, they are distinctly different looking.  Both breeds are somewhat tall, with the Japanese Akita being a bit lankier. Both have the classic tightly curled Akita tail. For physicality that is where the similarities end. The American Akita is a bit stockier, while the Japanese Akita looks more foxy and agile.

Dog shows are what is known as “confirmation” shows. In dog showing it’s not about who has the biggest or prettiest dog, but which dogs most accurately represent what is considered to be the “breed standard.” To put it simply, the dog that comes closest to checking the most boxes of the breed standard wins that particular event.

However, just like people, dogs can come in many shapes and sizes, even if they are all the same breed. So how big are Akitas really? 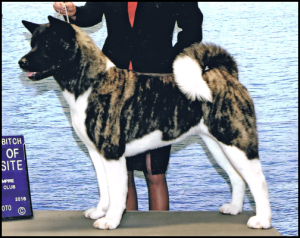 Haga is from Paradise Akitas in Idaho. His mom is CH Crown Royal’s Life is a Holiday a beautiful brindle colored Akita. The “CH” means the dog has won an AKC championship in dog showing. Haga’s father, Buster, is a big beautiful boy from Okami Akitas in Illinois. Buster is probably won of the most accomplished and winningest Akitas in the country, with too many titles and accolades to list here. He sits at a healthy 115-120lbs.

When we traveled to Illinois to pick up Haga, we were absolutely shocked when we met Buster. He is an absolutely beautiful and massive Akita. Pictures of the Akita breed simply do not do them justice. When you see an Akita on the lager side of the breed standard, they are incredibly impressive dogs.

Yet despite coming from two beautiful and healthy show dogs, Haga is a bit on the small side for a male Akita. Why is that? There are several factors that can go into how big your Akita will get. Dog breeding isn’t as simple as 1+1=2. One of the things that can effect the size of your Akita is litter size. 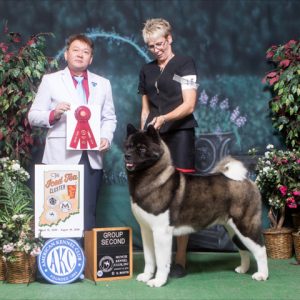 In Haga’s litter there were 10 puppies (which is a lot for an Akita!). The more puppies, the more the nutrients are divided by the Akita pups, which can result in smaller puppies overall. At the time of this article Haga is 17 months old and weighs in at about 85lbs, and he’s a couple whiskers shy of the 26″ height mark. Some people say Akitas will continue to grow in density until the 3 year mark, so it’s possible that he’ll still gain more weight, but getting taller at this point is unlikely.

If you’re interested in showing your pup, they’ll obviously need to meet the breed standard for size (among many other things). If you simply want an Akita for a companion pet, you really shouldn’t care how big or small your Akita may be as long as they are healthy. The truth is bigger dogs tend to have more health problems, it’s not uncommon for very large Akitas to only live 9-10 years. The larger the Akita, the harder it is on your dog’s joints and organs. Everything else will need to be bigger as well: their bed, their crate and your car!

Despite being “small” for an Akita, Haga is still a relatively big dog. He stands taller than most of the other dogs at daycare or at the park, and we get comments about how big he is every where we go. We always laugh to ourselves, because people would likely faint if they saw the size of Haga’s dad, Buster.

How to Choose the Right Akita Puppy

As previously mentioned, some people are obsessed with having the biggest Akita they can get, so how to choose the right puppy? Well, you can’t really, nor should you try. If you’re looking to show your Akitas, you likely already know what you’re looking for. If you just want an Akita as a pet, size is the last thing you should be considering when looking at puppies.

First you want to make sure that the parents of the litter (the Sire and the “bitch” or Dam) have well kept health record, including a good OFA hip and elbow score, as well as had their eyes checked, because Akitas are prone to eye problems. You also want to make sure that the Akitas are coming from a breeder who is passionate about the breed, and not simply looking to make a quick buck. To learn more about how to select a good breeder, check out our YouTube video on the subject.

As previously mentioned, litter size can effect how big your Akita will be, but in truth, puppies grow at different rates. Sometimes small puppies grow into big dogs, and big puppies end up as undersized dogs.

In the end, it’s not really the size of your Akita that matters, but rather the size of their heart. Akitas are incredible dogs, no matter how big or small they may be!