Are Akitas Good With Other Dogs? 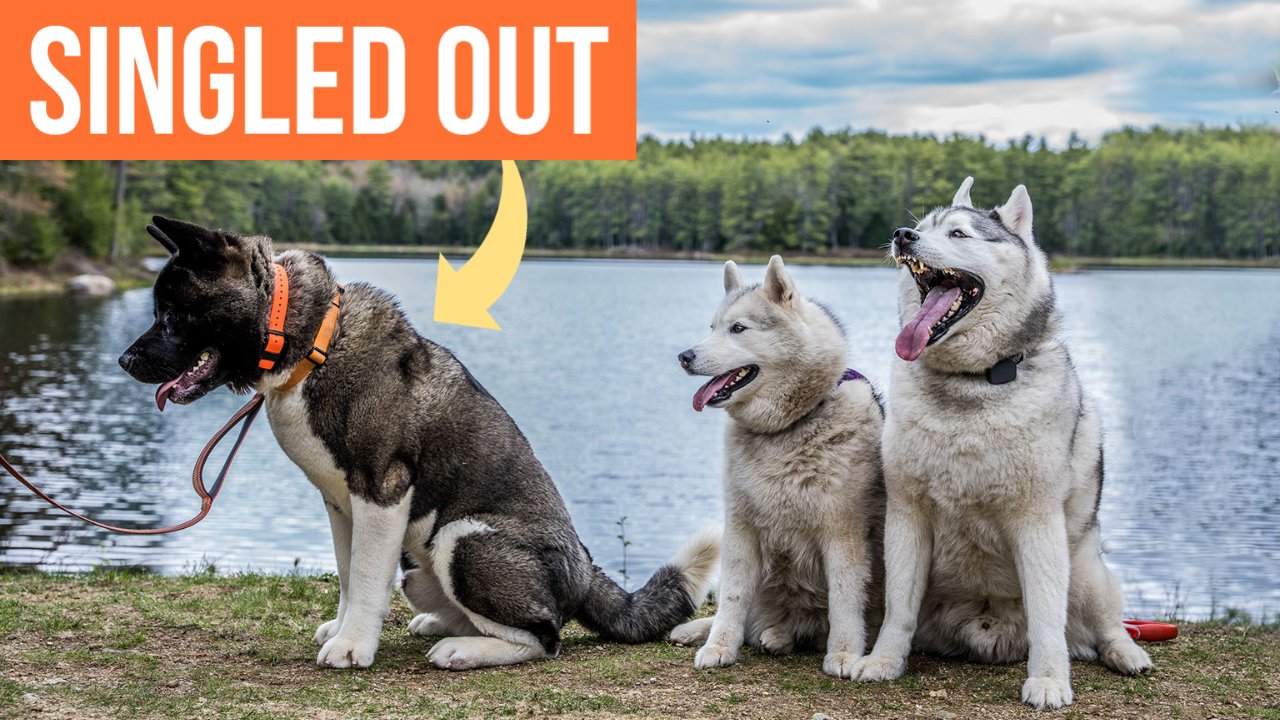 It’s hard not to want more than one dog, after all anyone who’s ever owned a dog, knows the joy of coming home to your best buddy waiting impatiently for you, and smothering you with kisses and excitement as soon as you walk through the door. And if you’ve owned an Akita, you know the bond they form with their owners is unlike any other. Although Akitas may not be as affectionate as some other breeds, they are fiercely loyal. I have absolutely no doubt that our American Akita, Haga, would sacrifice himself to protect our home, so when he decides he wants to snuggle, it makes it all the more special.

Typically Akitas are not good with other dogs. While you will find many people with households that have Akitas as well as other dogs, these are the exception to the rule. Typically Akitas are best in one pet households.  The long answer is, unsurprisingly: It’s complicated. So if you want to learn more about having multiple dogs as an Akita owner, read on.

It’s not uncommon when people have a question about dogs, they find a Facebook group about the breed, and ask their questions there. While it’s always good to get the perspective of actual Akita owners, but how much experience, and understanding of dogs in general people have will vary greatly from person to person, so take any responses you get with a grain of salt. 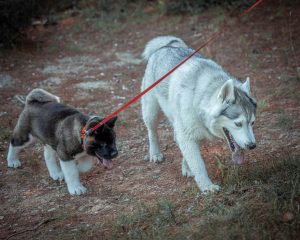 Akitas are not robots, and just like people, they each have their own unique personality. That means even if you’ve owned an Akita (or multiple Akitas) your experience may deviate from the norm. It’s not difficult to find people who have Akitas in multi-dog households and have had no issue, but the important thing to remember is: These are the exceptions, not the rule.

One of the defining characteristics of the Akita breed is that they are strongly independent dogs with a high prey drive, and a high desire to protect what they deem is “theirs.” This means they typically do not like other dogs, particularly dogs of the same sex. People who have owned overtly friendly Akitas will tell you that it’s all about how the dog is raised. This is only partially true. While training and socialization will make a big difference in any dog’s life, you have to remember you are battling against thousands of years of evolution and selective breeding.

The problem with someone sharing their personal experience with their Akita is that, they have no idea if their Akita would have turned out differently had they done more or less training and socialization. The way I like to describe it to people is to think of their Akita’s attitude on a scale of 1-10, with 1 being extremely friendly and 10 being extremely aggressive.

If your Akita is naturally a 10, then a lot of training and socialization may bring them down to an 8 or a 9.

If your Akita is naturally a 5, then a lot of training and socialization may bring them down to a 3 or a 4.

But it’s unlikely that an ultra aggressive dog will ever become friendly with other dogs, no matter how they were raised. So while it is important to train and socialize your Akita from a very young age, you must still be prepared for a life with a dog that may need a lot of personal space.

Our Experience with American Akitas

Our previous pup Loki, was a Japanese Akita mix, and his personality was quite a bit different from our current pooch, Haga The American Akita. Like Loki, Haga is extremely protective of the house. Bringing other dogs into the household was a big no-no with Loki, but once outside of the house, he was tolerant of other dogs and was occasionally playful.

Haga started out being welcoming to other dogs in the household, but once he reached sexual maturity, the house became completely off limits to other animals. He’s also very hit or miss with other dogs while on leash. Sometimes he wants to play, and sometimes he simply wants to destroy anything in his path. 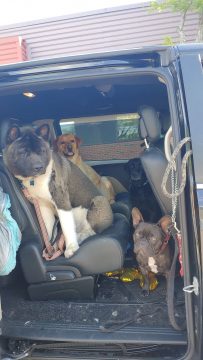 Interestingly, Haga loves to go to daycare and play with many other dogs. Typically there are 15-25 dogs in total at the daycare Haga attends, and he gets very excited to go to “school” and play with his friends. I attribute this behavior to a few different factors:

We’d eventually like to add a second American Akita to our family, but seeing how our current American Akita reacts to other dogs in our house, it’s not clear if it will be possible. One thing is for sure, if we do get another Akita, it will have to be a female for there to be any chance of them cohabitating since Akitas are commonly same sex aggressive.

Does the Breeder Matter?

I saw a question posted in an Akita Facebook group recently where someone asked “If I get an Akita from a good breeder, will they be dog friendly?” It’s an interesting question, but in reality, I don’t think the quality of breeder has a lot to do with it. Let me explain:

Good breeders are most often showing their Akitas in dog shows, also known as conformation shows. The whole point of dog showing is to produce a dog that fits the “breed standard” as closely as possible. The breed standard is defined here in the United States by the American Kennel Club, also known as the AKC. 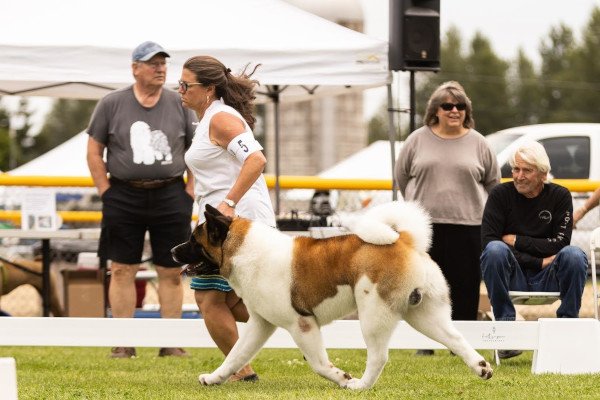 During conformation shows the emphasis is placed on the aesthetics and health of the dog. Judges are looking at the height, weight, shape, and gait of the dog. While temperament is on the list of things the AKC considers, it’s brief:

“Alert and responsive, dignified and courageous. Akitas may be intolerant of
other dogs, particularly of the same sex.”

Why does this matter? Good breeders are working to preserve the breed standard, that means when they are choosing Akitas to breed together, they are looking for the qualities that the AKC defines as the standard. As you can see, temperament isn’t a big part of that equation, and the breed standard is that Akitas are intolerant of other dogs.

I do not condone buying puppies from backyard breeders, however you may be more likely to get a friendlier Akita from a backyard breeder, because their Akitas are likely bred simply to be good pets, or may even have mixed blood with another breed, which can sometimes produce a mellower dog.

If you are adamant about getting a puppy, make sure to work with a reputable breeder (ideally one from the Akita Club of America’s breeder list) and speak with them in depth about the temperament of the sire and the dam of the litter, and if possible, go interact with the dogs to get a sense of their personality. If both parents of the litter are friendly with other dogs, that bodes well for their puppies to be as well, but it’s still not a guarantee.

There are several Akita Rescues throughout the US (you can find a list of them here), and if you’re concerned about an Akita being intolerant of other dogs, rescuing may be a good option. Most of the Akitas at Akita rescues are adult Akitas. This means that their personalities are more developed, and the amazing people running these rescues will be able to tell you if a particular Akita needs to be in a single pet home or if it can cohabitate with other animals and other dogs. 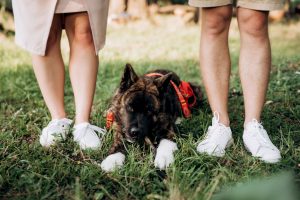 There is often a stigma around Akitas in shelters, and many people believe that only “bad” dogs end up there. Nothing could be further from the truth. People surrender their Akitas for any number of reasons. Sometimes they lost their job and they can’t afford to keep their beloved friend. Some people fall ill or pass away. Other times someone may be moving for a new career and they can’t take their Akita with them.

The truth is, there are a lot of amazing Akitas at these rescues, so it is always worth giving them a look before forking over the money for a puppy, and like I’ve already mentioned there are advantages to adopting!

The most important thing for any potential Akita owner, is to be prepared. You can do everything right and still end up with an Akita that is intolerant of other dogs. If that’s the case, you need to be ready to deal with it, which can mean accepting the fact that you’ll only have one dog, or setting up your home and lifestyle in a way that can keep your Akita separate from other dogs. This might sound like a lot of work, but this is actually how many breeders live their lives, considering that they usually have a whole gaggle of Akitas running around.

And ultimately if you can’t make it work. Don’t force it. Don’t put your Akita through a life of being around a dog they don’t want to be around, and don’t force another dog to be around an Akita when the Akita may hurt them. That’s not fair to the dogs, and responsible dog owners put their dogs first, so in that way, being prepared could potentially mean being prepared to rehome your Akita or other dog.

If you found this article helpful, please consider sharing it with a friend!