Are Akitas Good With Kids? 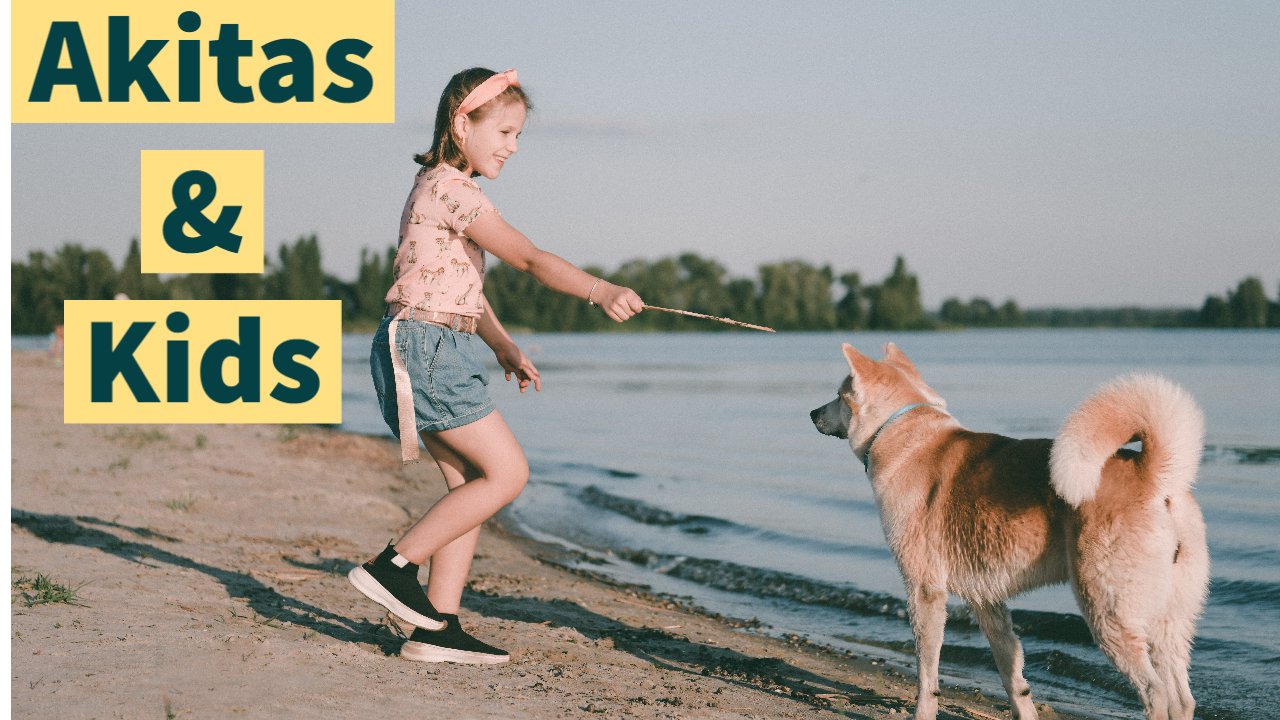 Akita puppies are arguably the cutest puppies in the world, and when we are out and about with our American Akita, Haga, we always get the same comments from children “Your dog is so fluffy! Can I pet him?” Fortunately for us, our American Akita is quite friendly with strangers in general, but that is not typical of the Akita breed. And despite Akitas looking like sweet, cuddly bears, they can have a mean streak in them. So that begs the question, Are Akitas good with kids?

Akitas can be great with kids, however that is not always the case. Because Akitas are a large breed, have a powerful bite, and can be aggressive, we generally do not recommend them for people with small children. Akitas can have a wide variety of personalities and preferences, and in general are known to have very distinct personalities, so if your Akita doesn’t like children, you will know it. The problem is, will it be too late before you know?

Start with an Akita Puppy

If you have young children, and you want to bring an Akita into your household, I would recommend getting an Akita puppy, rather than adopting an adult Akita. Akitas form strong bonds with their owners/families, so if your Akita grows up with children in the household, there is a better chance of your Akita bonding with your children and being more tolerant of them. 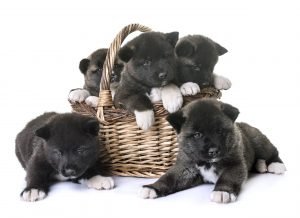 I use the word tolerant because children can test any dog’s patience. Consider the fact that children don’t have the motor skills or social awareness to fully control their actions, especially when around animals, so a child may inadvertnetly tug at a dog’s ear, tail or touch them in a way your Akita doesn’t want to be touched.

Even if you raised your puppy with children in the household, you really shouldn’t leave your Akita and your kids alone and unattended until they are old enough to understand how to behave around an animal. 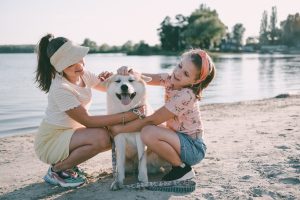 One thing you’ll hear experienced Akita owners say over and over again is: Akitas require strong leadership! The Akita breed is incredibly intelligent, independent, and domineering. If your Akita puppy senses any weakness in your leadership, they will take full advantage of you and the situation. This could mean disobeying commands, tearing up household items like shoes, hats, gloves or even a piece of furniture, and generally just having their way.

If you feel as though you don’t have the time to properly train your Akita because of your kids, that’s okay, but you should wait until your children are older before bringing an Akita into your home.

Training an Akita for Kids

There is always a constant debate between nature vs nurture when it comes to dog training. It’s important to remember that it’s not an A or B option when it comes to training your Akita. Your Akita’s inherent nature will play a role in your Akita’s temperament, however any dog’s behavior can be modified by proper training. This is why it’s so important to make sure you have the proper time to train your Akita.

Proper socialization of an Akita puppy is crucial to them being well mannered around kids. You can check out our whole guide on Akita socialization, however, here are the key points:

The more you socialize your Akita puppy, the better chance they will be good with kids.

Akitas and Kids: Fact and Fiction

Akitas are an ancient breed, harkening back to feudal Japan or perhaps even before that. Many people think that the Japanese Akita Inu is the “original” Akita and American Akitas are an offshoot of that, but that’s not actually true. Unfortunately time hasn’t been too kind to the Akita and the breed has undergone many iterations, and was near extinction shortly after World War II. 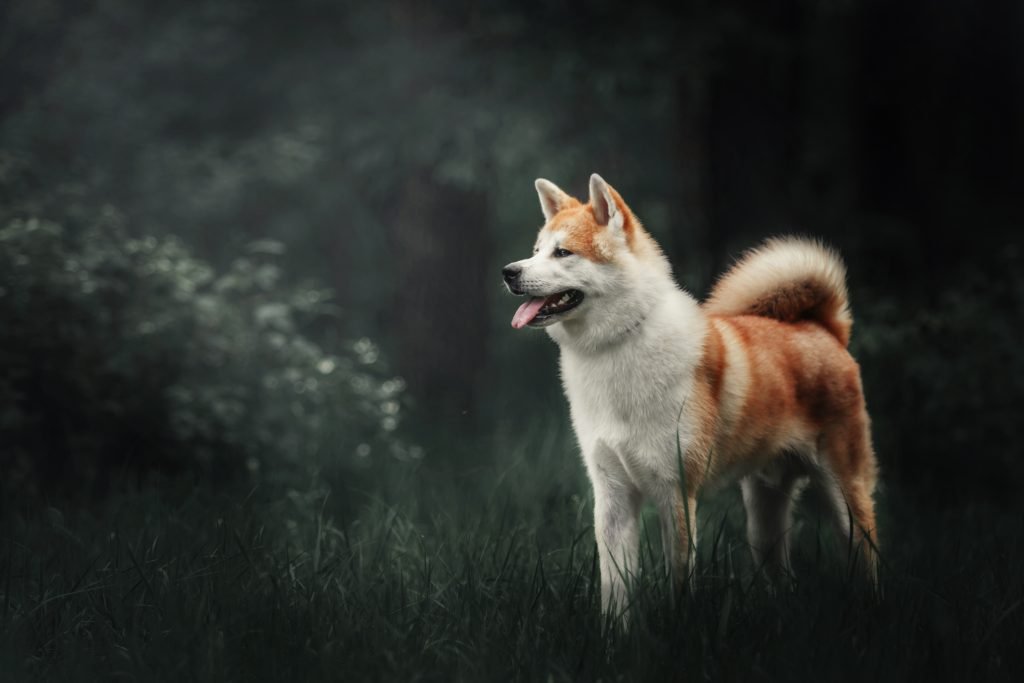 One of the mythos surround Japanese Akita Inu dogs is that they were used as “Nanny” dogs in ancient Japan, and that mothers would leave their babies unattended while the household Akita would watch over the children, so the parents could go work in the rice fields. Whether or not there is any truth to these stories is hard to say, but what is true, is that the breed has since undergone so many changes and challenges, that it’s unlikely that any temperament characteristics of that era are probably gone. In the years since then Akitas were bred both for dog fighting and for bear hunting.

Having Kids After You Already Have an Akita

Many people, either admittedly or not, choose to get a dog before a child as a sort of “practice run” with their new marriage. There’s nothing wrong with having a family dog and then having kids, however many times once the children are in the picture, the dog is “out of sight and out of mind.” I’ve seen far too many people give up their dogs, or worse, put their dog down, because they now have a baby in the household.

If you already have an adult Akita, and plan on having a child, it’s very difficult to know how your Akita will react to their new baby brother or sister. If you’ve had your Akita around other children, that may give an indication of how they’ll react, however dogs are all about familiarity and routine, and Akitas are no exception. This new bundle of joy you’ve brought home will certainly be a disruption to the normal routine of your household, so if you are bringing a baby into your adult Akitas life, make sure to do it very slowly, and in a controlled manner, and it may not be a bad idea to do it under professional supervision the first few times they interact with one another.

The Importance of a Good Breeder

Ultimately, one of the functions of an ethical breeder, is to only place dogs in homes that will be a good fit. This is why we write so frequently about working with ethical breeders. If you’re shopping for an Akita puppy in the US, the Akita Club of America’s website will be a good place to start. If a breeder isn’t registered with the ACA, you probably want to avoid that breeder.

Good breeders will have thorough puppy applications, and will inquire about kids in the home. They’ll have a good idea of the temperament of their Akitas, and if it their puppies will be right for you and your family.

You may also want to take a look at our article regarding Akita Bite Statistics.

The mighty Akita is an amazing breed, whether you’re talking about American Akitas or the regal Japanese Akita Inu, however they’re not for everyone. Part of being a responsible dog owner is knowing when it’s the right time to bring a dog into your life or not. If you have young children, or are planning to soon have kids, it might be best to wait to take home that new Akita puppy.