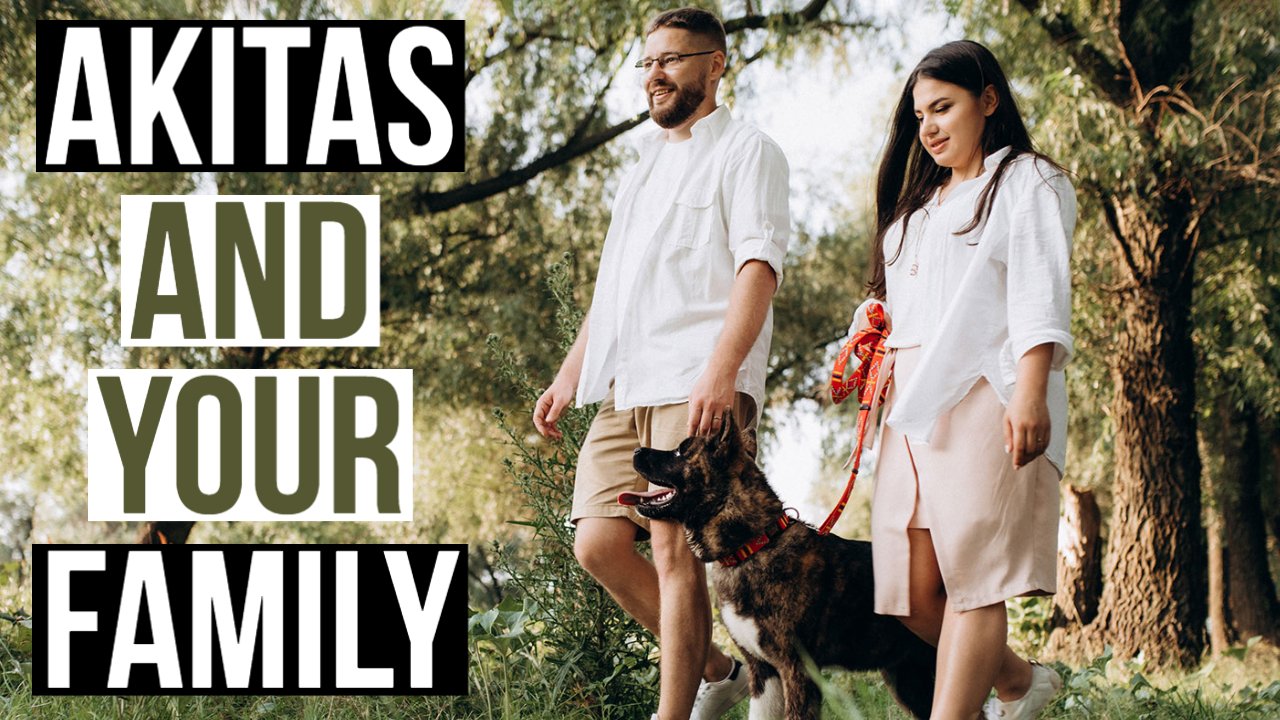 Akitas are a rare breed. Literally. Because of that rarity, there simply isn’t a lot of good information readily available about Akitas on the internet. Learning about the “breed standards” is always a good place to start, but that will only get you so far. There are a lot of traits typical to Akitas that my American Akita, Haga, does not have. One of the questions that comes up frequently is:

Are Akitas good Family Dogs? Akitas can be good family dogs, as they are known to form strong bonds with their owners, and to dislike strangers, so if your Akita forms a bond with both you and your children, they can make an excellent family dog, however, I typically discourage people with young children to bring an Akita into the household, and this is an opinion that I share with respected Akita breeders, veterinarians and dog behaviorists. Here’s why:

Akitas, in particular American Akitas, are big, strong and powerful dogs. Initially bred for tasks such as home defense, bear hunting and dog fighting, Akitas are agile, intelligent, and have a strong bite. Akitas are also known to have very little patience and a strong will. If you have young children in the house who aren’t able to understand the concept of boundaries, this can (and has) ended in disaster.

Young children pose to issues around any dog: First they may not understand the concept of giving the dog their personal space. Some dogs, like my last dog Loki, an Akita mix, loved to be nearby me all the time, but wasn’t always a fan of being touched. This can be hard for a young child to understand.

Secondly, kids don’t always have the best control over their bodies. That means what they may intend to be a gentle pat on your Akita’s head or hind, might turn into a hard tug on the ear or tail. A true family breed like a Golden Retriever may accept this behavior, while other mild mannered dogs may simply be annoyed and walk away, but the strong willed Akita may take this behavior personally…and retaliate. The Akita’s stubbornness is one of the reasons why dog behaviorists recommend harsh training methods like wrapping your Akita on the nose when misbehaving, or bossing your Akita around, as those methods are likely to only escalate situations, rather than get your Akita to do what you want.

In my video about reasons why Akitas may not be the right breed for you, I recommend not having an Akita unless your kids are old enough to take the dog for a walk on their own. While this may seem extreme, the repercussions of a dog attacking any person, let alone a child, are massive. Putting the bodily harm a child could endure aside, many places have a zero tolerance policy for dog attacks, meaning your precious pup would be put down in such an event.

The risk is also amplified by the fact that Akitas are “silent hunters” meaning they at times do not show any aggression or irritation before attacking. While many dogs may growl, snarl, or show their teeth to let you know that they don’t appreciate your behavior, this isn’t always the case for Akitas. So if a child is annoying an Akita, they may not get any warning before the Akita takes action.

“But My Akita is Great With Kids!”

One of the most frequent comments I get on my YouTube channel when I discuss issues like having an Akita as a family dog, is people saying that “I don’t know what I’m talking about” because they have an Akita that is great with kids. If you own an Akita that is great with kids, that’s awesome! It would be great if all Akitas were great with kids, and while you can go online and find dozens or even hundreds of people who also say that their Akitas are great family dogs, you can also find many people who’s Akitas are NOT good with children in the household, or people who have been attacked by an Akita.

While we aren’t trying to discount anyone’s personal experience, we also don’t want someone to read a comment from a single individual, and get the wrong idea about the breed. If someone brings home an Akita and it’s not the right fit for the family, there will be negative consequences for both the humans and the Akita. Not only will you have the emotional loss of needing to rehome your Akita, but your Akita’s quality of life won’t be great either going from home to home, or ending up in a shelter, or worse…

Dogs, including Akitas, are just like people: Every one of them has a different personality, but knowing the trends for the breed is a good starting place. There’s a reason why good breeders inquire about children in your home on their puppy application. It’s because they know that frequently children and Akitas don’t mix. And if you’re offended by that notion because your Akita is good with kids, I’ll throw my own personal experience in the ring and say that neither my current Akita nor my previous Akita mix were fond of children, which is a perfect example of why you can’t go off of someone’s personal experience alone, in a decision like this.

Akitas and Other Dogs and Cats

Having a family dog isn’t just about how your dog will interact with kids, but how a dog will interact with other pets in the household. Typically Akitas should be the lone dog in the household, and if you are hellbent on having more than one dog with your Akita, then they should be the opposite sex, since Akitas are known to be same sex aggressive, particularly female Akitas.

Again you’ll be able to find people have three or four or five or more dogs in the house with their Akita with no issues, but this is the exception, not the rule. In some situations, people who have multiple dogs along with their Akita, have to go through pain staking processes to keep them separated.

When it comes to other pets, like cats, rabbits, and other small animals, I would strongly advise against it. Akitas have an extremely strong prey drive, meaning they’ll want to kill/eat any small critter roaming around. Join one of the large Akita groups on Facebook and you’ll be treated to horror stories of Akita owners coming home to find their Akita killed their cat, even after the Akita seemingly didn’t mind the feline friend. Don’t put other innocent animals in that position, and don’t put yourself at risk of experience the emotional toll of the guilt this will leave you with.

While it may seem like this is an awfully negative article about Akitas, it’s simply an honest look at the breed, and honesty is important to make sure that Akitas don’t end up in homes where they don’t belong, because it’s a detriment to the breed when they do. Here at the Akita Life, we LOVE Akitas, and we want more people to love them too, but in order for the breed to flourish, these beautiful dogs need to be in homes where they can be safe and happy.

If an Akita isn’t in the appropriate home and something terrible happens, they bite a child, they kill a cat, they fight with another dog, etc…It only hurts the breed and the reputation of the Akita, when it was the irresponsibility of people that lead to that event happening.

If you are hellbent on having an Akita and you have other dogs, cats, or kids, it is absolutely crucial that you work with a reputable breeder who breed’s their Akitas for temperament, that you begin the socialization process as soon as possible, and you work with a dog trainer or behaviorist. Your family and your Akita deserve it.

To learn how to socialize your Akita, click here

Previous Post
Best Ways to Socialize Your Akita
Next Post
What is a Long Coat Akita? | Woolies 101!