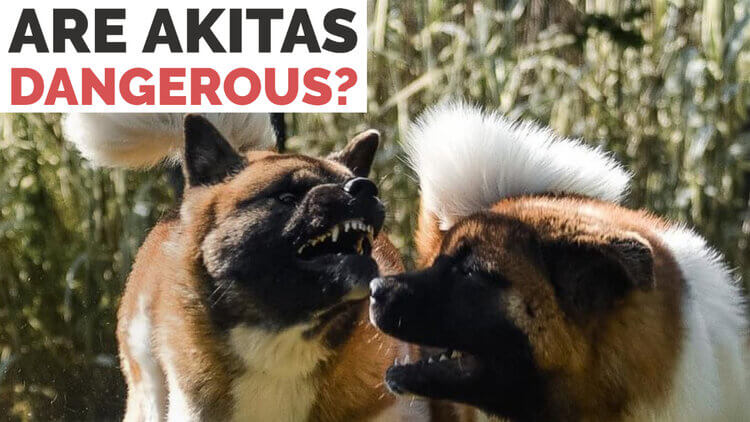 Are Akitas dangerous? It’s a fair question considering that Akitas definitely have a “bad” reputation. Much like like Pitbulls and German Sheppards, some home owners insurances won’t insure you if you have an Akita, and some landlords won’t rent to you either if you own an Akita. Given that Akitas were originally bred to hunt bears in the mountains of Japan, and Akitas are known for their distrust of strangers, it’s no surprise that Akitas are thought to be aggressive. So what’s the truth?

The answer is…it depends. Although dogs have been domesticated for thousands of years, they were originally wild animals, and there are still some breeds of wild dog living out in mother nature. This means that dogs have evolved to be impressive hunters, with powerful bites and sharp teeth. While some dogs are more commonly easy going, like the picturesque family Golden Retriever, the truth is any dog can be dangerous if it’s been inhumanely treated, hasn’t been socialized, or has been bred specifically for an aggressive temperament.

With that in mind, the opposite is also true. Although Akitas may be considered dangerous, it really comes down to three factors:

Let’s get into it.

So, are Akitas Dangerous? We’d say no more or no less than any other large dog breed. We can’t stress enough how important proper training and socialization are for a happy, healthy Akita, so make sure you are budgeting those things in when you’re looking into getting an Akita puppy or any other dog. And always remember, when it comes to OTHER people’s dogs, be sure to ASK them if you can approach and pet their dog before you do it.