Akita Sleeping Positions: What Is Your Akita Telling You? 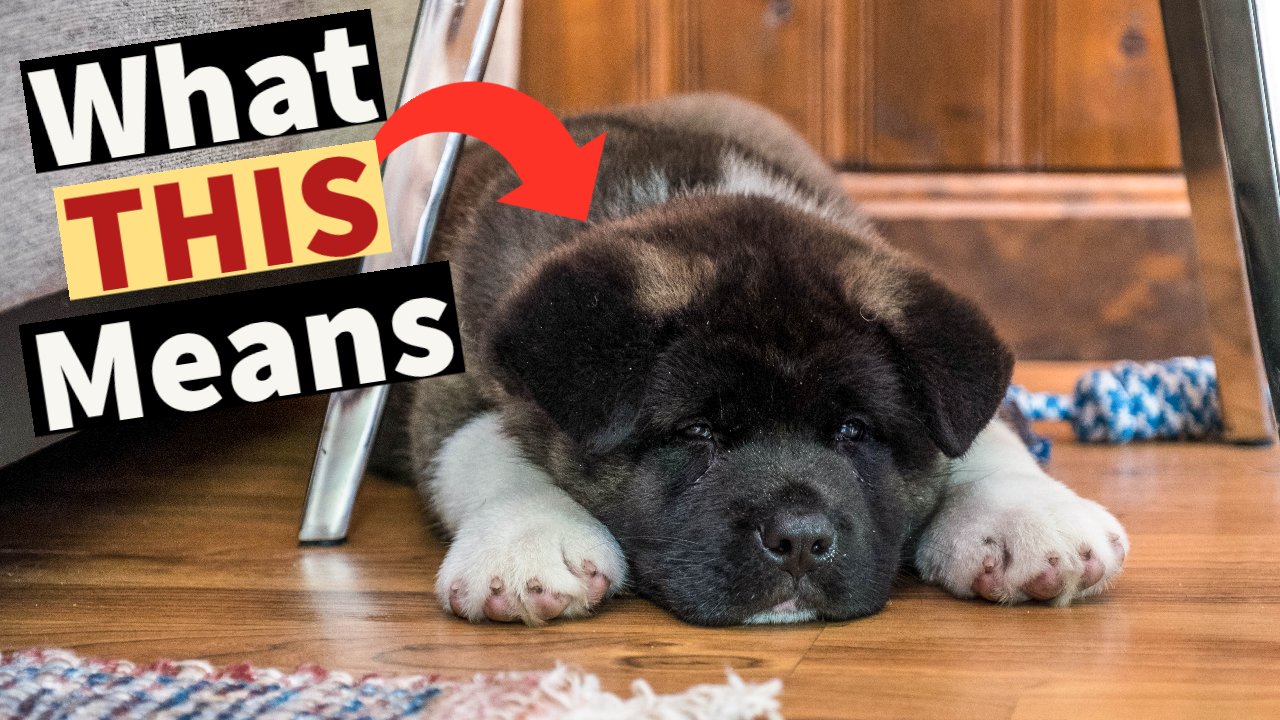 Akitas are arguably the cutest breed of dogs, and it doesn’t matter if you’re talking about American Akitas or the Japanese Akita Inu, they are both beautiful in their own special way, and nothing is cuter than a sleeping puppy! Today we’re going to look at the common positions Akitas sleep in, and what their sleeping position tells you about their behavior, attitude and how they’re feeling. Let’s get into it!

Have you ever seen your Akita curled up into a tightly shaped ball? We call this position the doughnut! Our American Akita Haga likes to sleep in this position when he’s on the couch, and it’s most common to see him sleeping like this when the house is a bit chilly. Although Akitas are bred to be cold weather dogs, hailing from the Akita Prefecture of Northern Japan, they can still get chilly from time to time! 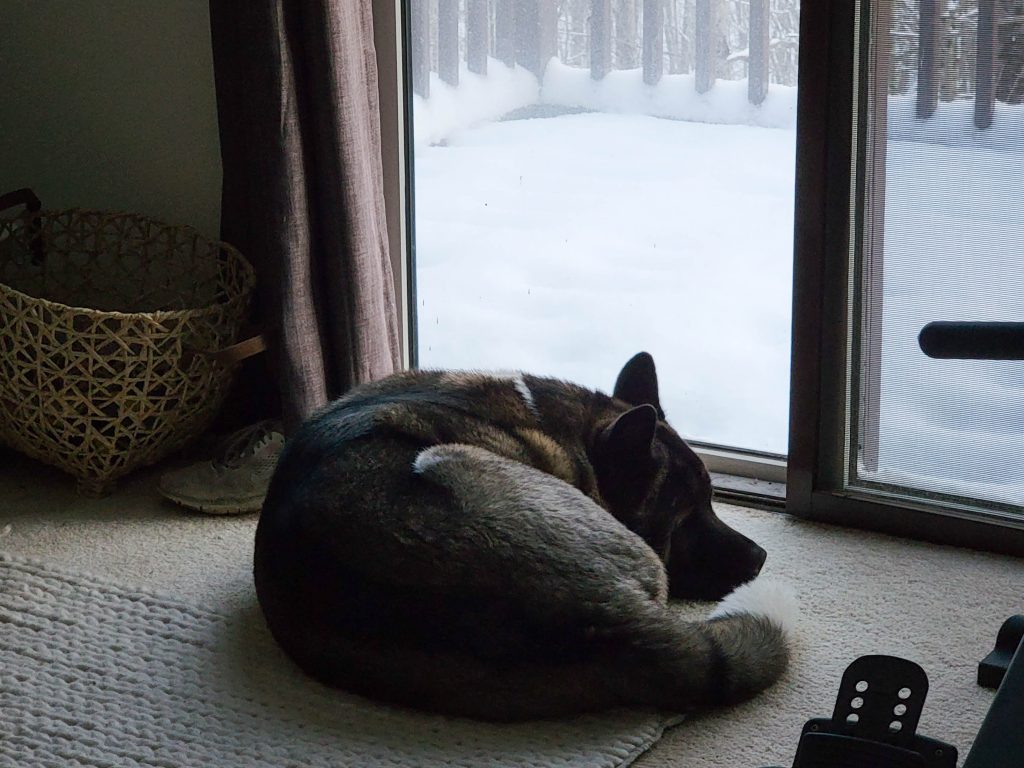 This tightly curled position is great for keeping in body heat, and keeping your Akita cozy on a cold day or in a drafty house. Because this position is best for helping your Akita keep warm, it’s unlikely you’ll see them do this in the summer months!

But be on the lookout, your Akita may also sleep in this position when they aren’t feeling well! Whenever I see our American Akita, Haga, sleeping like this, I’m sure to give him lots of rubs and affection to make sure he’s feeling okay.

This Akita sleeping position is the exact opposite of the doughnut! You can usually find your Akita sleeping this way when they they are too warm, and usually on a very hard surface like a kitchen floor! This is the most common sleeping position for our American Akita, Haga, he loves sleeping on our bay window where the cold air from outside can keep his temperature just right! 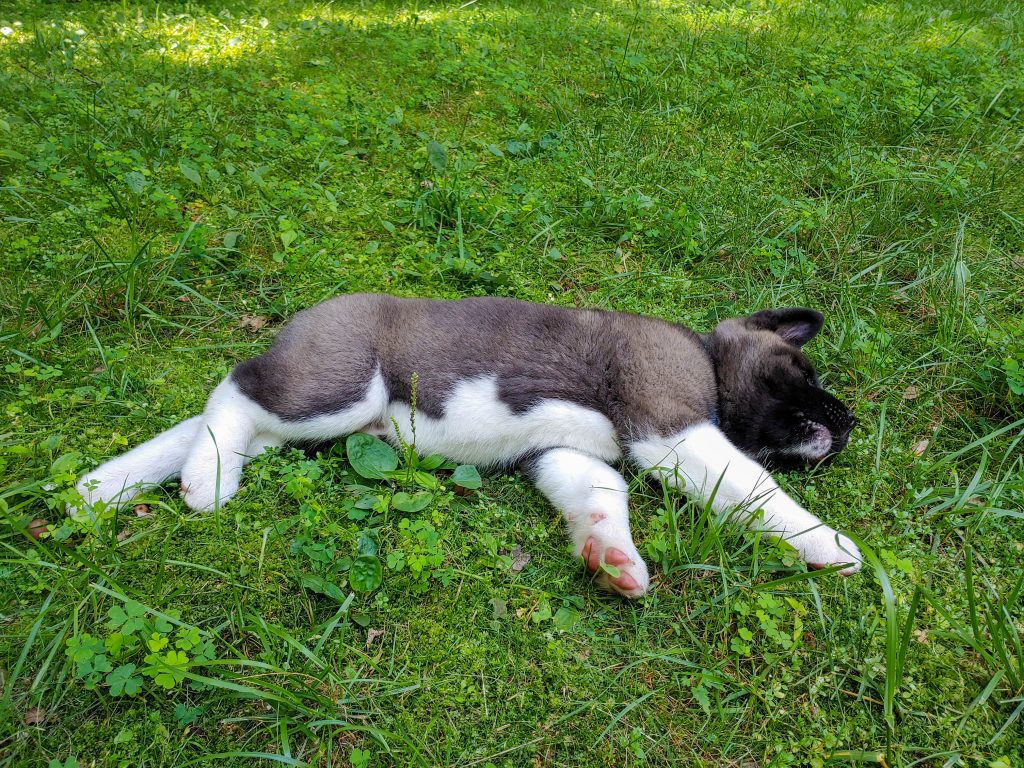 Your Akita may also sleep in this position with their back pressed against you! This means they trust you and see you as part of their pack and like to be near to you, and there is nothing more special than Akita snuggles! 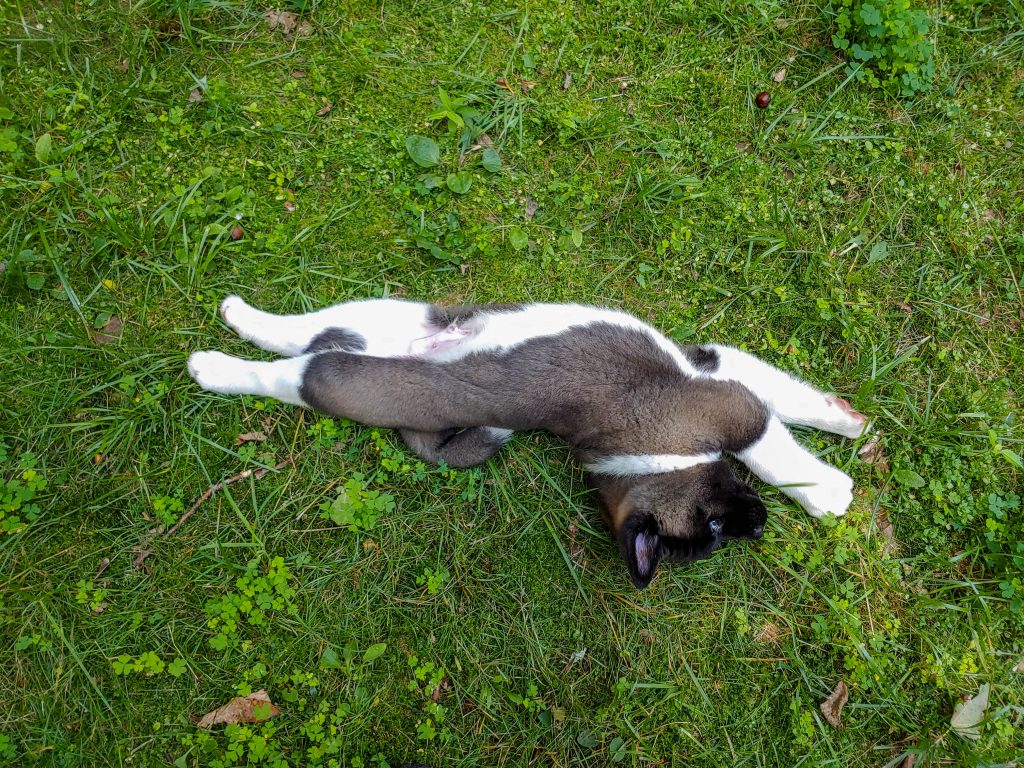 I’m not really sure why Akitas find this position comfortable, but hey, whatever works for them!

Is there anything cuter than seeing an Akita puppy with their back legs stretched out and their pink little toes facing upward? This position is very common for American Akitas when they are puppies, because their hips are extremely flexible, and their reproductive organs underneath are not fully developed. As your Akita reaches adulthood, this position becomes less common, but Akita puppies love to do it because it gives them a good stretch! 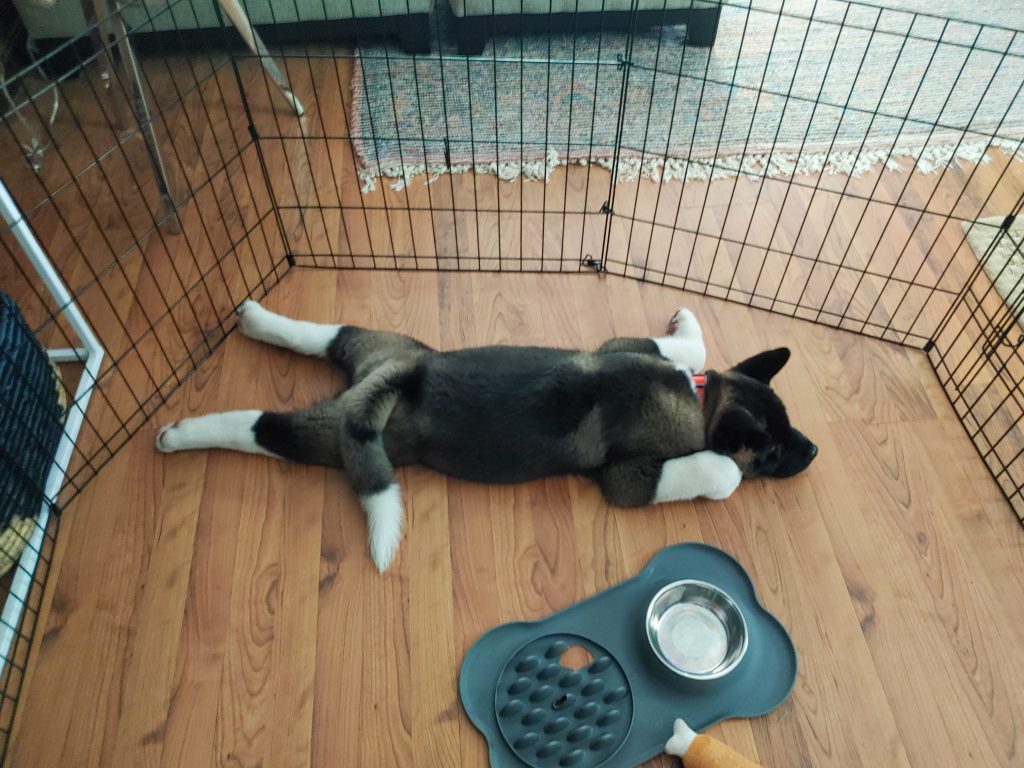 Our American Akita would go nuts while playing when he was a puppy, then would “power off” and pass out in this position!

You can think of this position as the adult version of the Superman, and it looks just like the name implies: Your Akita will sit like the sphynx only with their head down sleeping. This position is very common when your Akita is just taking a quick nap. Although Akitas are known to be aloof and independent, they still love to be near to their owners. If your Akita wants to keep a watchful eye on you, or wants some attention, they may lay down in this position and then doze off. 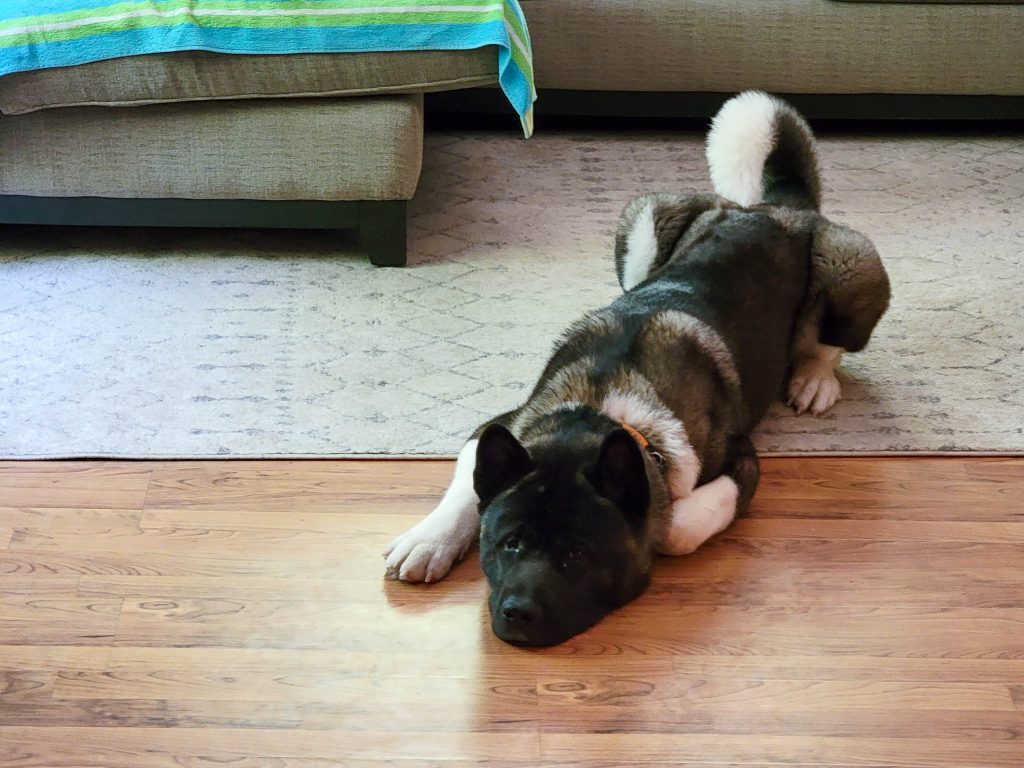 You can tell your Akita is waiting for you to pay attention to them by how quickly they usually snap their head awake if you make any movements near them!

The last Akita sleeping position on our list is the Little Spoon! Not every Akita likes to cuddle, but our American Akita, Haga is a total snuggle bug! He loves to be little spoon with us when we first get in bed at night. Again this is your Akita telling you that they want affection and love, and of course we’re happy to give that to him! 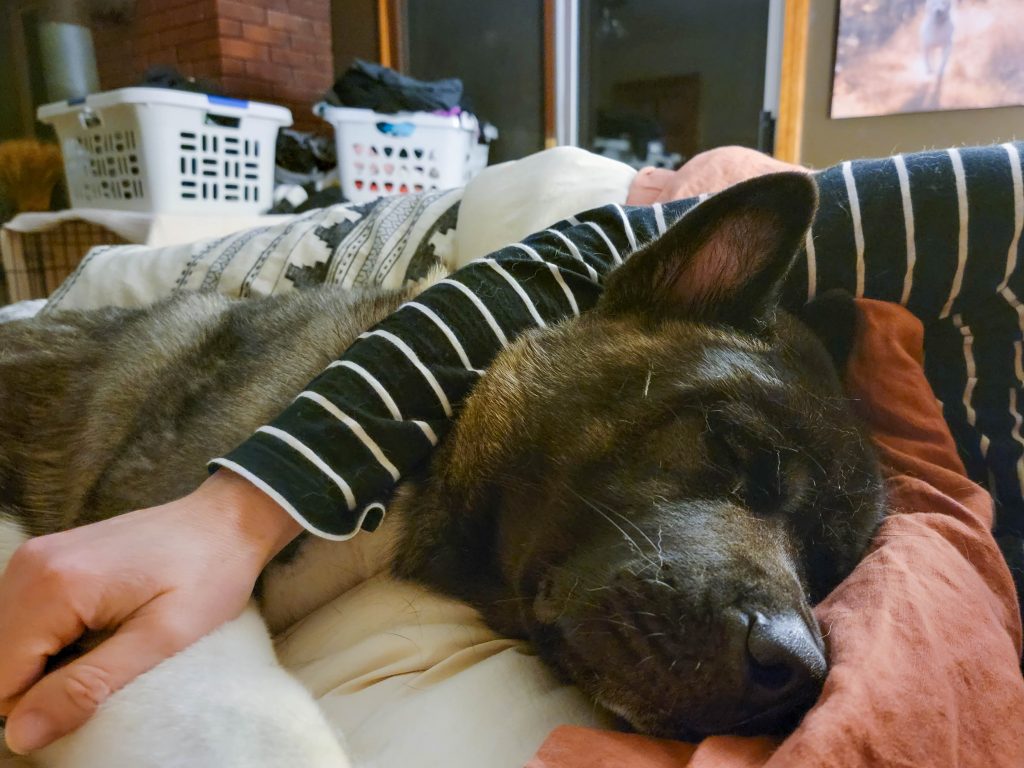 As much as some Akitas may like to snuggle, the Little Spoon typically won’t last long as your Akita will get too hot. Our American Akita, Haga will typically snuggle until we fall asleep, and then he will go lay in a cooler part of the room, or even down in our kitchen on the floor where it is much cooler. It is for this same reason that many Akitas HATE dog beds, as they get much too warm on them!

Previous Post
Are Akitas Good With Kids?
Next Post
Bringing Your Akita to the Vet: Everything you Need to Know